I am always game to try new types of foods, so when we were told that we would be going to an ethiopian restaurant with my Food and Culture class I was excited. But I was also a little weary. I had never had ethiopian food before and i assumed that it would be a little like Indian cuisine, something I am not a fan of (i really do not like curry).
But this normal trip to a restaurant became so much more. The owner Ben opened Abyssinia a few years ago and hired ethiopian refugees to come and work. A man named Osmorom (which means reconciliation in ethiopian) began talking about his life. He was in the navy for many many years, and eventually became a captain. When war in ethiopia broke out they placed him in the army as a foot soldier. After two years he decided to escape to a refugee camp. At the camps there is not much food, water, and no work to be done. For seven years he stayed in this camp until he was finally able to make the journey to America. When he got here he worked a few different jobs, until he found Abyssinia. A place that he now calls his home.

When we got there they first served us a sweet popcorn, something that the refugees call "American flower". They also served us fried injera chips with a garlic yogurt sauce. 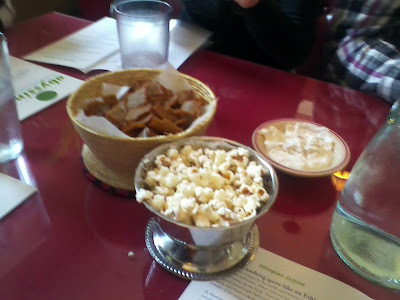 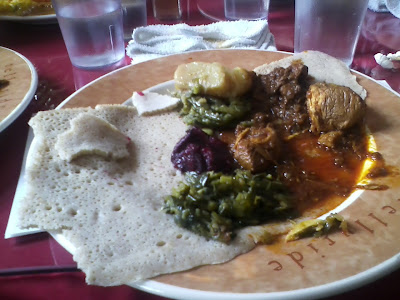 I got some chicken, beef, collard greens, beets, green beans, and potatoes. The sauces the chicken and beef were in were very mild, and they were extremely tender. I could not believe how delicious it was.
We were shown how to pick up the foods with the injera, and told that you may only eat with your right hand, because the left is seen as dirty. We also tried some Tej, a home-made honey wine.
After lunch they set up a traditional tea ceremony for us. 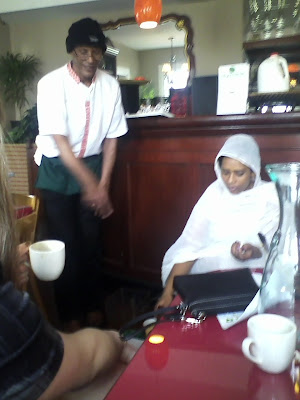 The woman burned incense and performed the tea ceremony for us. We were told that in a traditional tea ceremony you drink three cups, the third one being the blessing. 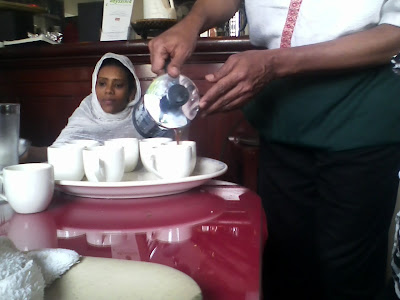 The coffee was very different from the coffee that we are used to. It was sweet even without sugar and had some fruity notes to it.

After we ate the owner began telling us how he wants the refugees to become more involved with the restaurant. He said that having volunteers come in and teach the refugees how to greet customers and use cash registers would be a great help in integrating them more into the restaurant. The Ethiopian people are very shy at first and want to stay in the back of the house, but with our help we could show them how to be more comfortable with the guests. This is something that I would love to get involved in.

Abyssinia was an amazing experience. The people were very friendly, and the food was delicious. I enjoyed my time there and I will definitely be returning soon. 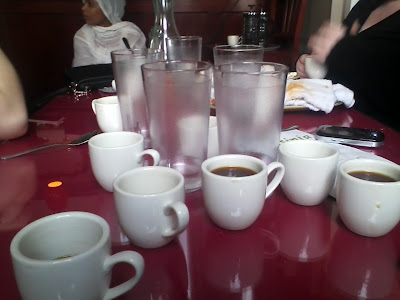