A Rainy Day off

What's there to do in Disney when it's raining cats and dogs? Go to the movies of coarse. So me and two of my friends ventured out in the pouring rain to Downtown Disney to the AMC Theaters. Once we got there we decided to go see the new Adam Sandler movie "Just Go With It". I wasn't expecting a great movie, I was just expecting a few laughs here and there but for the most part I figured it would just be another cheesy Sandler flick. Let me tell you, I have no laughed that hard in a really long time. I absolutely loved it.   It was definitely the best movie both him and Jennifer Anniston have been in, in a long time.

After the movie we decided to get food at Paradiso 37. There was a guy in there with his guitar playing songs by John Mayer, Dave Matthews (who was in the movie by the way) and Counting Crows, along with various other songs including his own. He was pretty good although he sounded the same as any male singer these days. They all seem to have that same voice. Anyway, it was very dark in the restaurant but I was able to get a few pictures of my food in since I knew I would probably be making a post about it.

After dinner we walked around a little bit, and of course stopped at the Ghirardelli store for a free sample of chocolate for desert. 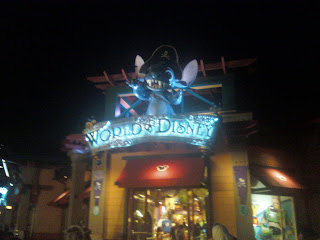