After eating enough sandwiches to last us a lifetime we decided to go and grab some lunch at Finns Seafood Restaurant. 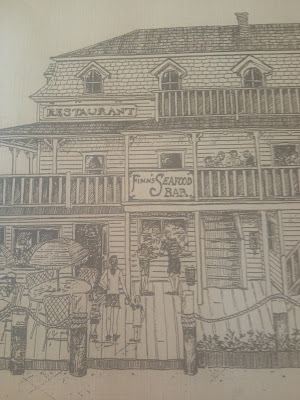 Now I normally do not  post bad reviews here on Simply Casey, but I am here to give you guys my honest opinion. The menu at Finns did not peak my interest, and the items were way over priced. If you are in the mood for a fried seafood sandwich by all means check Finns out, but that is not what I was craving.
We started out with the Cajun Calamari. It had a nice spice to it but was a little greasy. It was served with peppers and a tarter sauce for dipping. Although this was not my ideal pairing, it was good and was comparable to your average calamari appetizer. 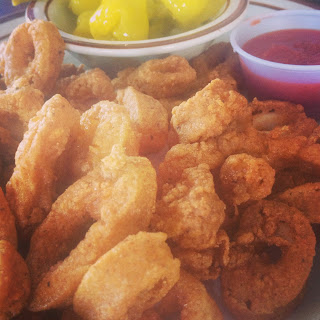 We also ordered clams and oysters which were the main reason we decided to go to Finns in the first place. 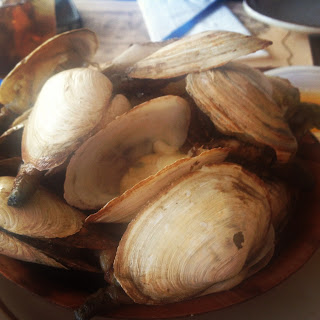 For my entrée I ordered a cup of New England clam chowder and a small salad with what the menu described as "grilled tuna". The soup was nice and light, and was my favorite thing I tried at Finns. The salad however was not what I was expecting at all. 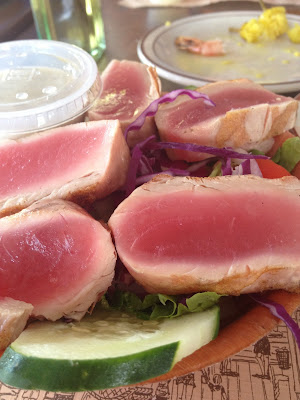 ﻿
﻿
The salad was served in a very small bowl and was piled with pieces of very raw tuna. Now I know that this is something that many people enjoy. I too enjoy raw tuna when going out for a nice sushi dinner. This tuna however had no flavor, and was very chewy. You could tell that this tuna had been seared off earlier in the day, sliced, and stored in the refrigerator for later use. I know this from my experiences working at chain restaurants. This method saves time, but also produces an inadequate product.
When the bill came, I wound up paying a lot more then I expected to for the quality of food that we were served. I did not enjoy my lunch at Finns and I personally would not recommend it. If you do find yourself there however, order the clam chowder..it is the best thing that they have on their menu.
﻿
Posted by Casey Dotson at 1:03 PM