Mediterraneo, which is owned by the same people who own Café Dolce Vida, Amici, and Wise Guys Deli, is located at the beginning of federal hill. The sales team decided to go out to dinner on the hill before an event at the Hilton and I, never passing up a chance to try out a new restaurant, went along.
We started out with drinks of course, and a couple of us ordered a pitcher of their white sangria. It was very sweet and didn't have much fruit in it, but was still a great choice and I would order it again. 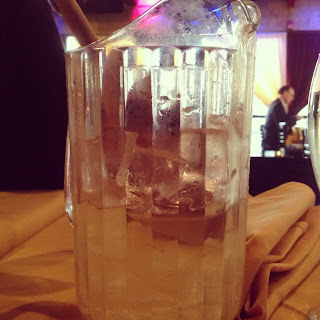 Most of the people in our group ordered off of the pre fix three course menu, something they offer seven days a week, not just during restaurant week. Trying to be healthier I decided to just order an entrée, skipping the appetizer and desert that comes along with the three course meal.


I decided on the pork tenderloin marinated in honey, Dijon mustard and fresh herbs, encrusted with seasoned bread crumbs and oven roasted. It is served with grilled asparagus, Italian style roasted garlic mashed potatoes and a side of apple brandy cream sauce. I chose to get extra vegetables instead of the side of mashed potatoes. I have had them before however, and they are simply amazing. 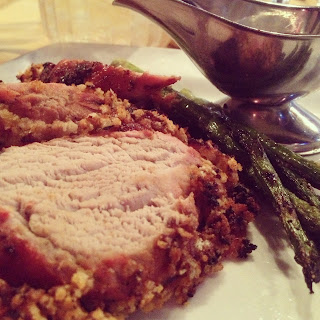 The pork was tender, and very flavorful. The best part of this dish was definitely the Dijon rub on the outside. It added so much flavor to the dish that you didn't even need the apple brandy sauce.